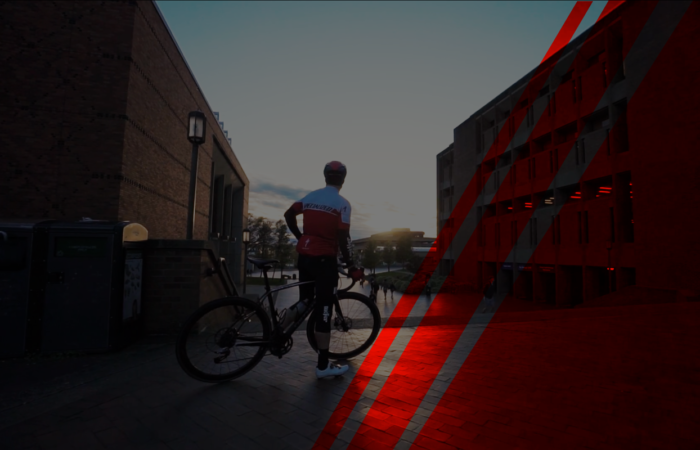 “We crave the freedom of the open road, with the wind at our backs and our destination ahead…” 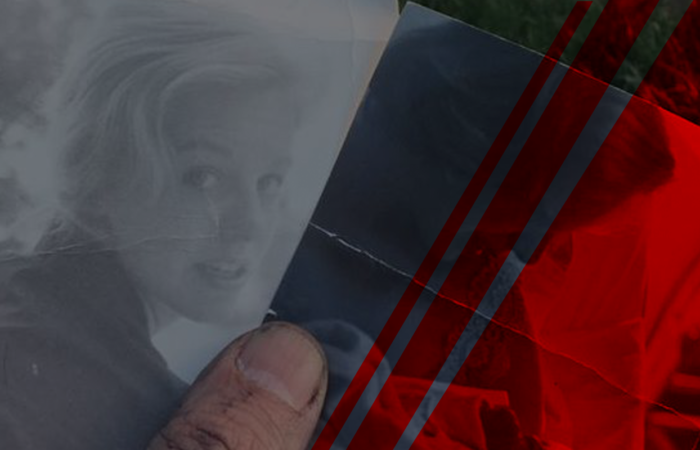 Our Mom’s mean so much to us that the pain or even the thought of losing them to cancer can be unbearable. This is why we ride and this is why we are making this movie. 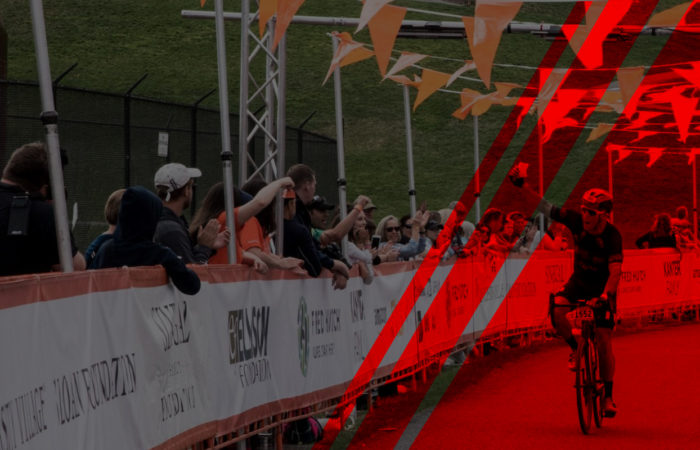 I have worked hard in the last two years to get physically, mentally, and spiritually fit so that I could be strong for myself and use the gifts that my creator, who I chose to call God, has blessed me with. I can’t keep it if I don’t give it away. 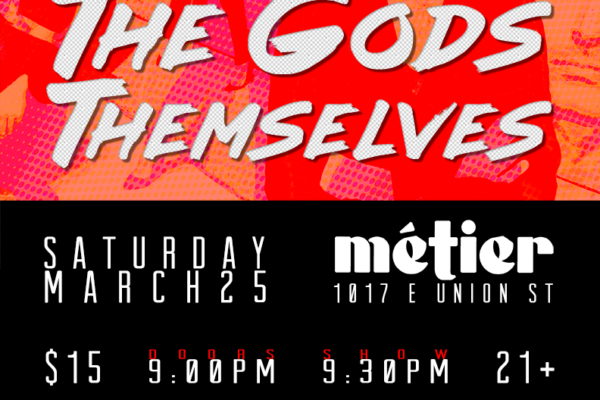 The Gods Themselves Play Launch Party At Metier 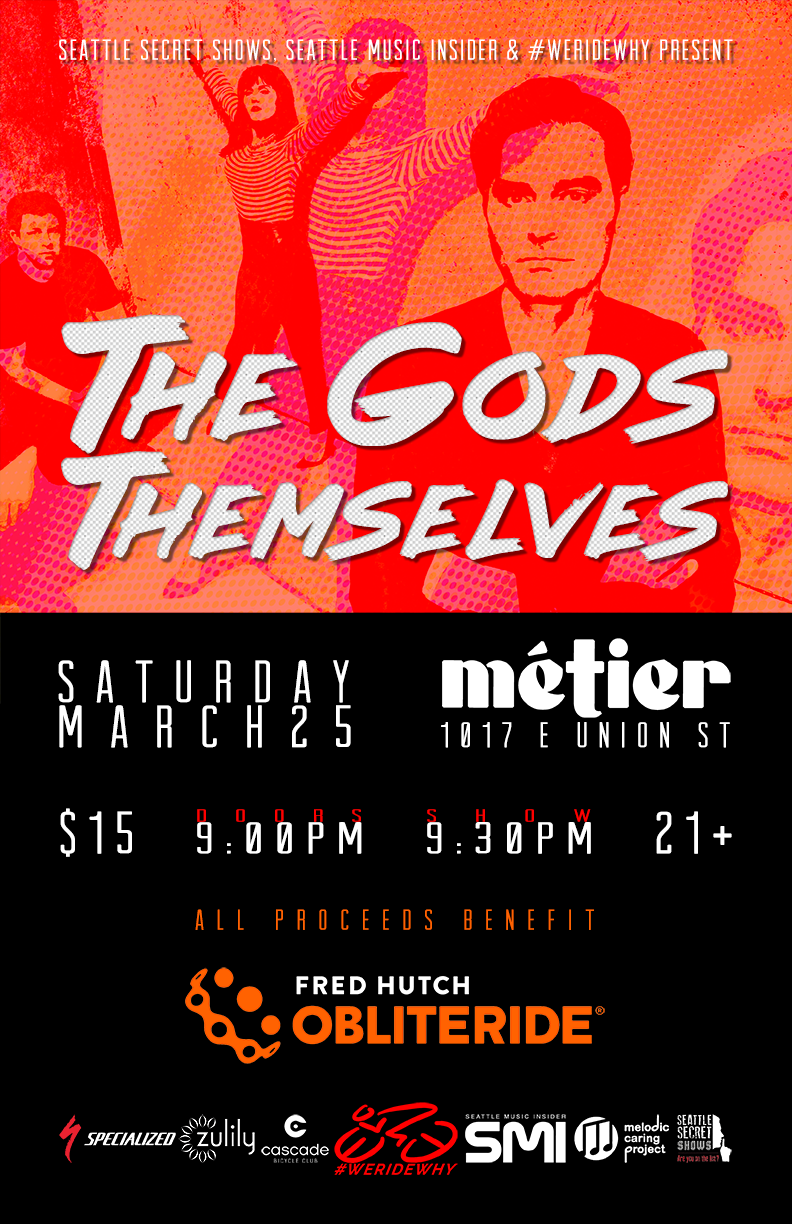 SeattleMusicinsider.com /#WeRideWhy in conjunction with Seattle Secret Shows present a music and fundraising event at Metier in Capitol Hill on Saturday, 3/25.

The Gods Themselves will be performing and featuring songs of their recent release, “Be My Animal.” including their recent single / video, “Tech Boys.”

The event is a fundraiser and celebration of the launch of WeRideWhy.com, as well as the official announcement and trailer for the forthcoming, five-piece documentary film, #WeRideWhy. The brief synopsis of the film is below for the full synopsis, please visit WeRideWhy.com.

All proceeds (after expenses) will go to (Seattle Music Insider / #WeRideWhy Founder / Creative Director) Greg Roth’s cycling team who will participate, in Obliteride 2017. The team will ride 100 miles in one day to raise $20,000.00 – $30,000.00 for cancer research via Fred Hutch.

*In addition, we ask that you download the Obliteride Mobile App on your smartphones and donate to: Team #WeRideWhy. You will be asked to make a small donation later in the evening (but only if your heart directs you to.) : )

To purchase tickets to the event go here

#WeRideWhy is a forthcoming 5-piece documentary series co-produced and co-directed by the brilliant Jason Tang. The film will tell the story of Greg Roth and hundreds of others like him who cycle in dedication to loved ones lost, or are currently suffering from cancer. The project will feature Jenny George, Ashley Berg and other mothers like Amy Furguson, whose lives have been negatively impacted by cancer and the collateral damage cancer brings forth. The story is broken into five parts below, culminating in a complete movie to be released around mid July 2017.

The purpose of the movie is to raise greater awareness of the direct and collateral damage of all impacted and the progress Fred Hutch has made in finding cures and reducing cancer’s foot print in our lives. In addition the film will be used to help drive fundraising for Greg’s team and promote the great work that Obliteride and Fred Hutch are doing to #CureCancerFaster!

Jenny, Ashley and other friends of associates will share their stories among a backdrop of elegant and action packed cycling footage of many riders. In addition the film follows Greg and his team as they ride around the Puget Sound and beyond preparing for Obliteride 2017. The film will take viewer up to weeks before the event, which will include 1500 – 2000 riders from throughout the Pacific Northwest and beyond.

Greg and his team, #WeRideWhy – zulily will ride 100 miles in one day to raise money for cancer research for Fred Hutch. The five year old cycling event takes place August 11 – 13, 2017.

Principal filming starts late February – with the first installment of the series to be released May 1, 2017. 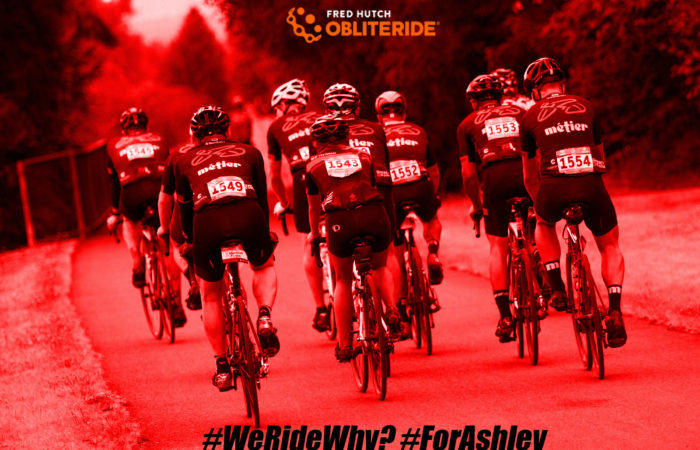 The winter months in Western Washington may not get as cold as the mid-west or eastern winters… but they get cold enough. Fortunately, with the right gear and attitude, you can get your winter riding miles in to maintain that cardio base so that you are peaking at the right time during the high-summer cycling season.

The promise of summer and some great traditional rides via Cascade Bicycling Club is enough to keep one warm on even the coldest of days. Last year, the three day event attracted 2000 plus riders that participated in rides in and around the Seattle area. Riders can register individually or register with a team. Of course we hope that you are interested in joining ours! Team #WeRideWhy zulily! Our team is committed to raising $15,000. 00 for cancer research for Fred Hutch. Obliterate 2018 takes place August 10-12. The rides will all finish at Gasworks Park in Seattle, followed by a celebration with live music.

Obliteride has built a dedicated community of riders, donors, sponsors and volunteers that have raised over $11 million for cancer research at Fred Hutch! In 2018 Obliteride will celebrate it’s 6th year. If you love cycling and have a passion to use your prowess to help #CureCancerFaster, we invite you to register and ride with our team.

To donate or register with #TeamRideWhy for Obliteride 2018 go here.